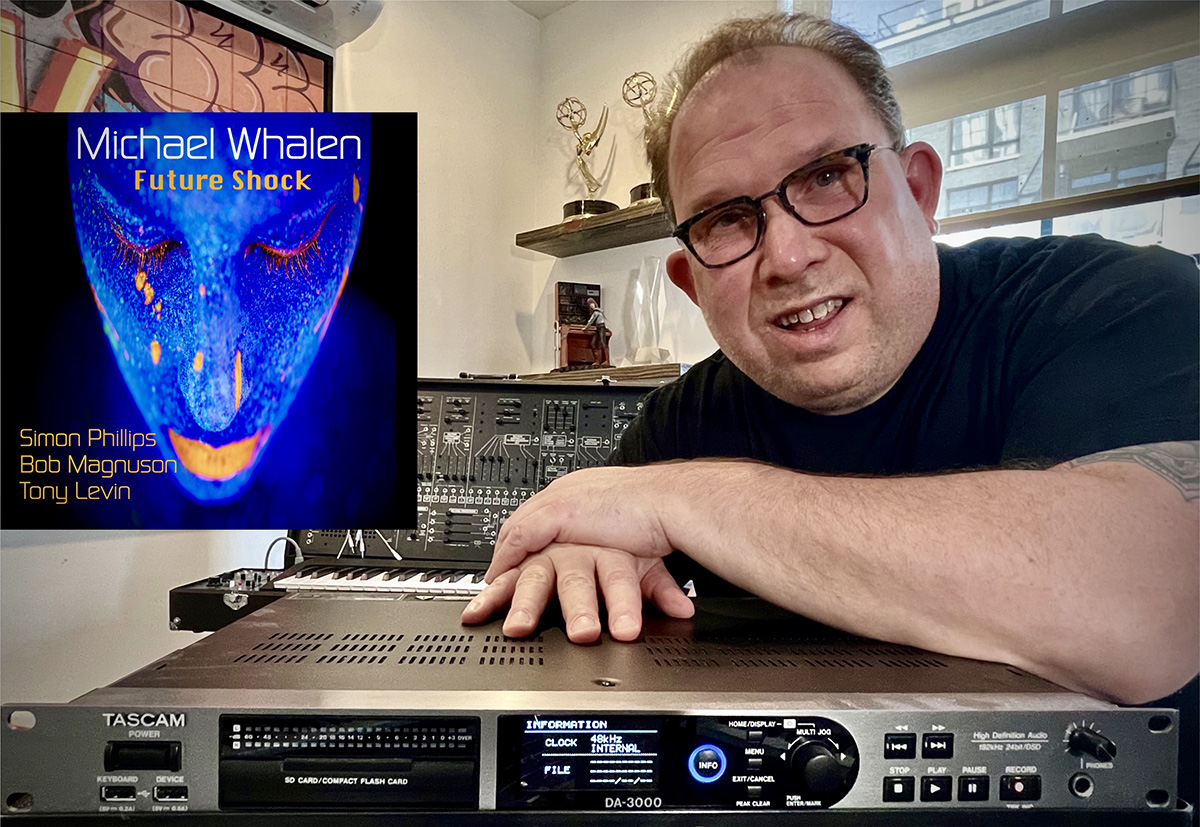 New York, NY – April 2021… Michael Whalen, two-time Emmy® Award-Winning Composer and Music Supervisor, Recording Artist, and Record Executive, knows what it takes to deliver world-class recordings. His credits include original compositions that span the genres of jazz, classical, pop, and new age, as well as film scores, television themes, audio books, and commercials. He has created music for thousands of ads, hundreds of TV shows, 14 feature films, plus the theme to ABC’s Good Morning America—and let’s not forget his 34 solo albums, along with a piano song with 38 million streams on Spotify. Simply put, Whalen is one prolific composer—and TASCAM gear is central to most everything he does musically.

Whalen’s exposure with TASCAM recording equipment dates to 1985 and his use of the TASCAM 388 Studio 8 quarter-inch 8-track tape recorder with integrated mixer. In the mid-to-late 90s, he was an avid fan of the TASCAM DA-88 8-track digital recorder (for which the company received a Technical Emmy Award), along with the equally popular DA-30 MKII DAT recorder. Reflecting on his time with these products, Whalen notes, “Each of these units served as the centerpiece of my studio during the years I had them. I remember them fondly!”

Presently, in addition to composing for TV, film, and facilitating the careers other artists, Whalen also runs a record label named myndstream (https://myndstream.com), identified as ‘music to support your mindful practices.’ These days, the TASCAM DA-3000 Stereo Master Recorder - AD/DA Converter is a pivotal tool for his various endeavors. “Since getting the DA-3000,” Whalen explained, “I have been using the recorder for capturing Hi-Rez Audio recordings using the DSD (Direct Stream Digital) format up to 5.6MHz. I have been blown away by the sound and the headroom. DSD is a very demanding format and I love the results the DA-3000 helps me achieve.”

Reflecting on the DA-3000’s various attributes he finds most appealing, Whalen focused on the recorder’s sound quality, SD card, and track increment capabilities. “First and foremost, it’s all about audio quality,” he said, “and the DA-3000 is at the front of the line in this regard. Secondly, I love being able to use SD cards as my recording medium. I’ve never done that before. It adds yet another element of flexibility that I really appreciate. And with the DA-3000’s automatic track incrementing function, audio files can be created automatically while continuing to record when various conditions, such as level, file size, or digital input, are set in advance. This ensures that everything gets captured, which can make all the difference in the heat of the creative moment. This function is awesome!”

The TASCAM DA-3000 was a core component in the creation of Whalen’s new album, titled Future Shock, which is slated for release on April 23rd, 2021 on the Spout/MWM label. According to Whalen, “It’s an instrumental jazz / fusion album featuring Simon Phillips, Tony Levin, and Bob Magnuson—and it has a ‘touch’ of progressive rock too! These three amazing musicians have spent their careers blurring stylistic lines and pulling influences from one musical genre to another. I knew this rhythm section would be great. I used the DA-3000 for all the mixing on the project. It was terrific. In all honestly, I wasn’t a believer in Hi-Rez masters at first. I didn’t really think it was a ‘thing’ and that you could do anything you needed with a 44.1 kHz/24-bit mix. Not true!”

Given the sophistication of electronic music and studio equipment, questions inevitably arise. For this reason, quality customer support services are of paramount importance. In this regard, Whalen was very complimentary of TASCAM. “The company’s response to my questions has been great,” he says. “The TASCAM website has been solid as well—particularly as I started getting into DSD. It’s been super helpful.”

Before turning his focus back to the business of the day, Whalen offered these parting thoughts, “I love TASCAM products and I have been using them for 35 years. The company and the brand have always represented quality and reliability to me. TASCAM products always become a focal point of my studio and an everyday part of my workflow.”

For more information about Michael Whalen or his forthcoming Future Shock album, visit his website at www.michaelwhalen.com.