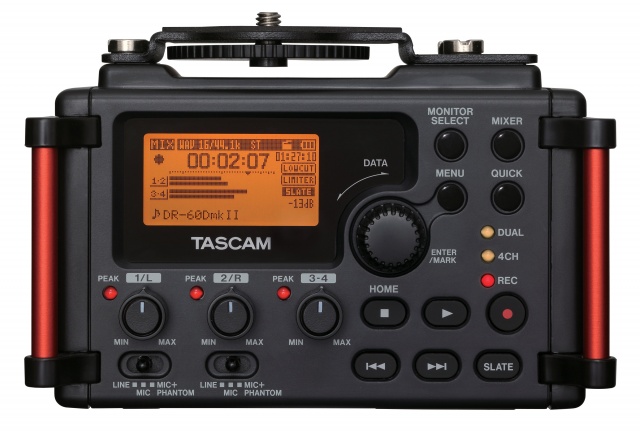 Montebello, CA (Oct 1, 2014): TASCAM has updated our recorder for use with DSLR video to the DR-60DmkII. The four-channel recorder gets new microphone preamps with up to 64dB of gain for recording quiet voices on set.

The DR-60DmkII is a portable recorder designed from the ground up to be the ideal recorder for DSLR filmmakers. The design of the DR-60DmkII contains a tripod mounting screw on top and socket hole on the bottom, integrating perfectly with cameras from Canon, Nikon, Sony, and others. The camera output attenuates down to mic level before passing the signal to the camera to prevent distortion. The new version includes an improved microphone preamp for up to 64dB of gain and a smoother sound.

A pair of XLR microphone inputs feed TASCAM’s latest HDDA microphone preamps and provides phantom power for condenser microphones. The preamp gain and other controls are easily accessed from the front panel with physical controls instead of software menus for quick adjustment. A second pair of inputs can be patched to wireless receivers or other sources for four-track recording. These preamps far outshine the camera audio, and individual headphone and line outputs allow an additional feed on-set.  Four channels can be recorded or the unit can be set to Dual Recording mode, which records a safety track at a lower level to prevent distortion.

At a cost less than competing preamps, the TASCAM DR-60DmkII is the ultimate 4-track recorder designed for filmmakers, television, live events and web broadcast.

For more information and photos, visit the DR-60DmkII web page.