Click Here to hear the bridge from Bart's GigaStudio demo of "Ordinary," including the extended break that didn't make the final version and featuring Media Ventures' London Symphony Orchestra library. 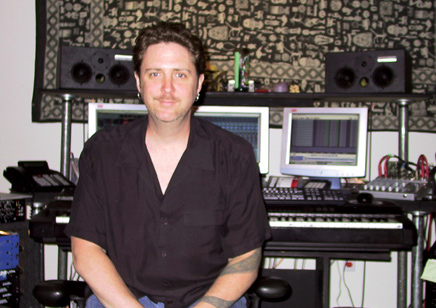 We caught up with Bart Hendrickson in his plush writing studio deep in the heart of Hans Zimmer's Media Ventures compound in Santa Monica, CA. Bart's day job is creating sound libraries for Zimmer and he's credited on films like The Last Samurai and Black Hawk Down, but he's also a composer and songwriter in his own right, contributing music for films like Pirates of the Caribbean, We Were Soldiers, Barnyard, Hannibal and the forthcoming Saints and Soldiers. We got an insider's peek into how he scored a tune for Spiderman 2 and heard a preview of the new single co-written with Train's Pat Monahan that'll be featured on the soundtrack of this summer's blockbuster.

"Pat is the singer for Train, and he was in town for the Grammy's. We always get together when he's in town, because he's a really old friend - we've played in bands together and we've written songs in the past. He couldn't get together at the Grammy's because he was really busy. He called about two weeks later. Sam Raimi's a big Train fan, and he called Pat to see if they wanted to submit a song for Spiderman 2. Pat called me and says, 'Sorry we couldn't get together, but the band has been writing some stuff. Do you want to help me mix these songs, it might be for Spiderman 2.' I said, 'Hell yeah.' 'Well, hell, why don't you write something?' he suggested. ‘I'll tell you what, the best song wins, and we split it 50/50.' So it's Sunday night, 10:30, and I came straight to the studio. I wrote all night and all the next day."

But Bart's all-nighter almost didn't make the cut. "I was thinking about Train when I was writing, so it's kinda ballad-sounding. Pat called me Monday night and said, 'Well does it f'n rock?' And I'm like, 'Uh…no!' I was thinking Train, you know, ballad. Well, I went home and was kinda sick to my stomach, like I'm gonna blow this. And then it just clicked. What else would rock but slammin' drums and guitars, you know? The seeds were there, the song and the theme. I just threw it together. Then I went and picked him up. We were waiting for a FedEx package of different elements of his song. So we listened to them as we were driving over, and they sounded like Train. He said, what does yours sound like? I told him that it was a lot darker; a lot heavier. We came in the studio and I played it, and said, 'We're doing yours.'"

"He said, 'Can I have 45 minutes to myself?' He wanted to listen to it and write the lyrics. I went and got a cup of coffee and came back about an hour later and threw down the vocal track and that was it. We got it to Sony and it wasn't a few days and they said, 'Yeah, we love it.'"

Bart approached this song on piano, " because I was thinking 'ballad'. I tend to write filmy sounding stuff anyway, and that was one of the things that Sony liked about it - that it sounded film-ish. This song just came out on piano and strings, basically. The guitars and drums were, as I said, an afterthought. I wasn't going to do something like that, but you know, 'how do we make it rock?'"

As Hans Zimmer's programmer, you could call Bart one of the world's experts on GigaStudio. So it's not surprising that he lists it at the top of his must-have apps. " The whole song is done on GigaStudio. I'm pretty crazy about that [Access] Virus right now, that's kinda fun - all my soft synths - Stylus, Atmosphere, Trilogy, Absynth, Reactor, and all the Waves plug-ins."

Most of the samples in the song are custom-built, too. "The samples are these custom guitars I had a friend do about a year-and-half ago. The thought was that there were no good heavy, heavy guitar samples out there. So I approached him because he's a great guitar player, and said, ‘Let's get some of these six- and seven-string guitars and do some Korn tunings where it's just...' It's not a real melodic sound they have, it's a power sound. We took a big Boogie amp into his den, right against the wall, plugged in a Les Paul, tuned it down to low C and just cranked it. And they're the best sounding guitars. Everybody says, 'Who did you have play those, man?' And I'm like, 'they're samples, man!' The same with the drums, all those were custom sounds." [Unfortunately, the guitar sample library will remain confidential.]

Another library Bart made extensive use of was Hans Zimmer's celebrated London Symphony Orchestra library. "Unfortunately the London stuff has to stay private, because that's the contract Hans has with the orchestra and George Martin. That library was an idea that Hans had even before I was here. They recorded it with a guy named Bob Daspit, who was a Roland guy . They went over and sampled the London Symphony Orchestra, and the deal was that they'd always go back and reuse that orchestra for the real soundtrack recording. It wasn't supposed to... it's found its way onto albums but it would never be a stand-alone thing, and it would never be for sale."

"They did a Roland version of it, so it was very small, and then about a year-and-a-half ago we got the masters and totally redid it for GigaStudio. Alan Meyerson did a bunch of noise reduction with a TC 6000 that really cleaned them up. I hired a few people to help recut and reloop and it took about seven months to do the whole thing. We took much longer loops and cut release triggers and stuff for it. I'm glad we did the release triggers but Jim had just brought that model in [GigaPulse] and I thought we didn't need to do the release triggers, but we did them anyway. This library is just for Hans to do mockups for his orchestral stuff. It's awesome. Many people have tried to recreate it, as you can see with all the orchestra libraries out there, but everybody still wants ours.

After Sony approved the demo, Bart handed off the song and hoped for the best. "Sony gets the song and they need to do their thing. They found a producer who wants to do it; his name is Don Gilmour and he did Linkin Park. Because the song is really heavy for Train, they wanted to know how to make it a Train song, but yet keep it how it was because they really liked the demo. So they hired Don because he's really great at getting the heavy sounds, guitars and drums and things like that." [Andy Wallace also produced.]

"It was really scary, because Pat said, 'I think they changed just a couple little things.' And you never know what that means. Is it just gonna be annihilated or what? So it was really cool for them to ask for the loops right off the bat, because at least we knew the tempo would be the same. They used my loops, the synths and little shaker thingies, which are actually rolled up newspapers playing on a brush, and some things that I had created in the Virus. They just pulled a little bit out of the bridge. They went straight into the vocal instead of having a little break first. I liked it better the other way, it would have made it a bit more cinematic as it is a song for film. But I don't know if would have made any difference anyway."

In the old days, songwriter demos were recorded with just the chord changes and a vocal, but Bart's demo took it to the state that the song could be released form his demo recording. "Yeah, it was release state. That's something I've learned from Hans. The whole idea about the orchestral library and all of the other sounds - we have a massive library of stuff with instruments from everywhere - and the theory is with anything that comes out of Media Ventures, our demos are better than other people's finished products.

So how did Bart wind up in the enviable gig working with Hans Zimmer at Media Ventures? "Obviously, when you first walk into Media, it's like, ‘Oh my God!' I started working for Harry Griegson-Williams and I said, 'I'll get you coffee or whatever you need.' I was more qualified than that, but you just get your foot in. So, I was doing some stuff for Harry and then Alan Meyerson needed some stuff… I was just floating around and word got around to Hans that this guy's good and he's reliable."

"So Hans grabbed me and asked, 'Do you know this software,' it was Gigasampler at the time. 'Do you know about sampling?' And of course I lied and said, ‘Yes.' But I didn't know s---! He hired me and I just hid out in this little shed for a while, with a few samplers and just started reading. But I had done a lot of digital editing, I knew Pro Tools well and I understood the theory. So Gigasampler was great because I knew computer editing and I was used to visual stuff. I don't know how these guys used to use these little samplers in the old days, the tiny loops, oh man! So it was a really good time to get started because I wasn't limited by the technology. I figured it out and started doing stuff, and that was it. I'm still here."

"This place is a technological think-tank. Hans is a pioneer, especially in sampling for film. He was the guy that really stuck his neck out and did it. I would be an ass to have a bad sounding demo come out of this place! I'm the sample librarian; I make all these sounds, and if my demo sucks, then what does that say? I've only got every library available to mankind, plus all our own. And that's almost detrimental because it's all about the song, it's not about all these grandiose sounds. They're great to have if the palette requires it, but it's still about writing songs. The state of technology right now, you can sit in your bedroom and have beautiful sounding stuff. "

Check out "Ordinary" by Train on the Spiderman 2 soundtrack, co-written by Bart Hendrickson and Pat Monahan.