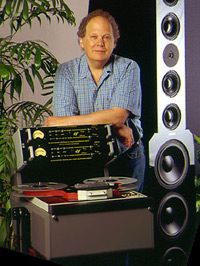 Eleven-time winner of the industry's coveted TEC award, Bob Ludwig is the only choice for most of music's biggest names. Bruce Springsteen, David Bowie, Mariah Carey, Don Henley, The Foo Fighters and Ozzy Osbourne are among the countless acts that don't consider their work finished until it's had the Bob Ludwig touch. We contacted Bob in his Portland, Maine-based Gateway Mastering studios to ask how he was using the TASCAM DS-D98 in his projects.

"We use the DS-D98 for internal file copies of both surround and/or high-resolution sound," says Bob. "Most of it is PCM, but sometimes we make DSD file copies. When we Dolby Digital or DTS encode 5.1 it is usually from an already quality assured DS-D98 tape."

When we asked if studios have started to deliver mixes in DSD format for use on Super Audio CDs, he reported, "So far no one has delivered DSD masters in this format. We get quite a few tapes in made on DA-98HR machines that we play back on the DS-D98. Some mixers, especially in Nashville and LA, send in 176.4 kHz or 192kHz stereo masters on this format. It works great."

"I assumed that the industry would be getting a bunch of these babies in order to [approve master recordings] more easily," says Ludwig. "It would be beautiful. I wish it would take off and make our SACD life a lot easier!"

Of course, at Gateway Mastering it's all about getting the best sound. When we asked the famously-picky Bob Ludwig about the sound of the DS-D98, he gave a typically perfectionist review. "When we A-B compared the stock converters on the DS-D98 with the best dCS or Ed Meitner SACD converters my feeling was I wouldn't be horrified if people were playing my SACD references back on a stock set of DS-D98 machines. I know that doesn't sound like a rave, but it really is considering those converters cost more than a machine does!"

With surround music becoming more popular every month and the exciting potential of Super Audio CD, the stunning clarity of the TASCAM DS-D98 is sure to play a part in tomorrow's classic recordings.