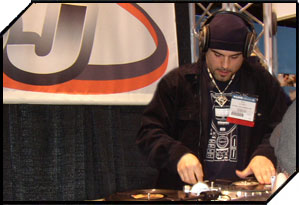 If you put your mind to it you can accomplish anything, and DJ Skilz proves it. With over 16 years of DJ'ing, Skilz has taken his career to astonishing heights. He's had his own signature DJ mixer, custom ringtones with Cingular, Verizon and more... all in his unstoppable pursuit of achieving ever-greater goals.

Skilz is resident DJ at the Planet Hollywood Hotel & Casino in Las Vegas, where he spins to packed houses three or four nights a week. He specializes in scratching. "The ability to scratch to your favorite music is a feeling so amazing that it can't be described," says Skilz. Over the years he has developed his own personality as a DJ, with his own style of mixing. You can hear the respect that he has for the artform and notice the unique creative ability he possesses when he's at the decks.

DJ Skilz recently came onboard with TASCAM, and his other sponsors include Mixwell and Shure.