Software samplers are playing an increasingly influential role in the creation of movie and television scores, as evidenced by this year's nominations for the movie industry's most coveted awards.

The Hollywood Foreign Press Association, purveyors of the prestigious Golden Globes, and the Motion Picture Academy, home of the Oscars, recognized some of the industry's major talents for their original scores associated with the year's top movies. While the music represented within these motion pictures covers a diverse and eclectic range of styles and composers, the common thread running through them all was the increasing trend toward the use of virtual orchestras and instrumentation. 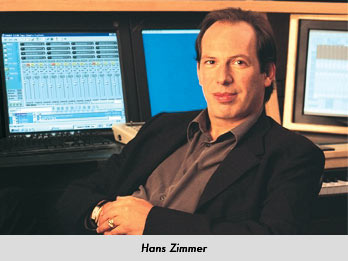 Computer-based samplers, with their ability to stream large samples directly from the computer's hard disk, are capable of approaching the sonic realism of actual instruments and orchestras, making them invaluable tools for the time-intensive process of creating music for big budget film and television productions.

Renowned composer Danny Elfman is no stranger to the award ceremonies - his current score for the Tim Burton film Big Fish is his third Oscar nomination (behind Good Will Hunting and Men in Black), and his second Golden Globes designation (he was also recognized for his scoring of Burton's earlier work, The Nightmare Before Christmas).

Elfman's medium of choice is GigaStudio, the powerful hard disk based sampler from Tascam. Elfman has been using GigaStudio for a number of years, having created the groundbreaking scores for such films as The Hulk, Spiderman (which recently netted him a Saturn award), Chicago and countless other movies

Another well-known name in the world of film music, and a long-time GigaStudio user, Frankfurt-born Hans Zimmer has received no less than eight Oscar nominations for such modern classics as Black Hawk Down, Pearl Harbor, The Ring, The Thin Red Line and Gladiator, and recently earned his sixth Golden Globe nomination for his work on the Edward Zwick-directed film The Last Samurai, starring Tom Cruise. His Los Angeles-based production company, Media Ventures is home to several state-of-the-art studios, more than twenty resident composers, and literally dozens of GigaStudio rigs. 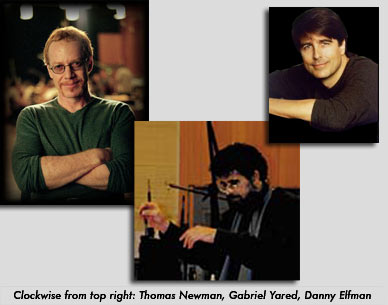 "I abuse GigaStudio on a daily basis - it's my main sampler," Zimmer enthuses. "The simple fact that we can mock up an orchestra with such unequalled realism is incredibly liberating."

Another long-time Giga user is Thomas Newman, whose score for the Disney/Pixar animated blockbuster Finding Nemo is in the running for an Academy Award. The son of legendary composer Alfred Newman, Thomas' lengthy discography includes the music for such films as Erin Brockovich, Fried Green Tomatoes and Desperately Seeking Susan. Newman has received four previous Oscar nominations, for the movies American Beauty, The Shawshank Redemption, Little Women and Unstrung Heroes.

A relative newcomer to GigaStudio, but certainly not to the world of film composing, is Frenchman Gabriel Yared, whose score for the Anthony Minghella-directed Cold Mountain (starring Nicole Kidman, Jude Law, Natalie Portman and Donald Sutherland) has garnered both Oscar and Golden Globe nominations for Best Original Score. Yared's past works include The English Patient, City of Angels and Message in a Bottle.

"Although I've only recently begun using GigaStudio, I'm truly impressed with what I can accomplish with it," he enthuses. "It's such a multi-faceted program, I'm constantly discovering new ways to use it."

In the high-pressure world of music for film, time is more than just money. As these and other leading composers are aware, the ability to quickly create and change a score can make the difference between a project's success and failure. Virtual samplers like GigaStudio can create breathtakingly realistic instrumentation that can literally replace the tense and expensive orchestral sessions of the past, giving the composer a new sense of freedom and creativity.