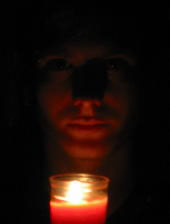 Thank you TASCAM for inviting me to compose this article about myself. I'm genuinely flattered and grateful for the opportunity to express my musical and technical thoughts and ideas.

Being a fledgling film composer I'm very involved with all of the leading edge technology surrounding and embedded in music today. Possibly even more so than some of the veteran Composers in the field. I base that statement on the fact I've been working as a tech for Richard Gibbs for several years now. Fortunately for me, he has also encouraged me to be musical at the same time, and has ushered in opportunities for me to do so. Richard's method of dealing with technical issues has always been to walk away from the rig and say "let me know when you've got it figured out, and I don't require an explanation". This approach does several things, for one, it keeps him sane during brutal scoring schedules, but more importantly it provided me with a job =-). I like to think of the years I've spent with Richard Gibbs as my master's degree in Film Scoring. I got my undergrad degree from Berklee College of Music. The whole experience prepared me to begin my own career as a composer, which has been going almost too good if there is such a thing. What I mean is, I've fallen into a circle of professionals who continue to support my ambitions, which could certainly be considered rare if you think of all the people flying into L.A. with the intention of being the next golden boy. I am eternally grateful.

If you read the article I wrote for TASCAM several months ago then you might remember reading about my involvement with Jonathan Davis of KORN and his relationship with Richard Gibbs and their Gigastudio experience, which continues to this day. I'm very excited to also be able to now describe my own. When I think back to when I was 13 years old with guitar in hand, recording myself on my TASCAM 4 track tape recorder, it's slightly surreal to be this deeply involved as a new TASCAM supported artist. But enough about the backlog.

I've personally been using Gigastudio at home since version 2.something. I always thought how cool it would be if they made this software as a multi-timbral plugin. Then GVI was born, which I'm about to go on and on about. This does not end my employment of Giga3; GVI is making way for a whole new realm of possibilities. Computer power has always been an issue with running Gigastudio and basically requires a dedicated machine loaded with RAM for doing so. That's fine for the big guys who have the cash, but I feel this had somewhat alienated young musicians because for many it is cost inhibitive.

It's like the video game phenomenon. I'm not a gamer and if I sat down and tried to get into it now I'm sure there are 7 year olds who could put me to shame only having invested a fraction of the time. But with the advent of GVI and the whole Laptop DAW situation, so many young musicians can get involved with the technology without having to mow a thousand extra lawns. Guys like myself no longer have to be as tied down to our studios. I've been utilizing a machine by Open Labs called the NEKO. I can throw that machine into a case and be on an island in the south pacific running Protools with GVI running my VSL library writing orchestral music in a grass hut if I so choose. Well, it may not be within the realm of actual reality, but it's certainly more practical than lugging 5 rack mount PC's around should I choose to go collaborate with someone in Pasadena. You catch my drift.

My favorite feature of GVI, besides the portability, is the ability to edit instruments right inside the plugin. I love messing with things and very rarely leave samples and instruments the way I found them. The LFO's, filters and other toys GVI offers is something I can honestly say I could not be bothered with in Gigastudio. Something about being able to work directly inside the DAW and plugin (which offers tempo sync from the host) relieves me from the gearshift involved with operating more than one machine. If you are working in a DAW like Nuendo or Logic which offers a "Freeze" function, then in my opinion the plugin has just paid for itself in hours saved bussing and printing tracks to get CPU power back. I know everybody knows exactly what I'm talking about.

Enough geeking out, let me end by saying how much I support TASCAM's products and in turn thank TASCAM for supporting me. I'm currently nurturing a partnership between myself, a director and a producer. I can't say much more about it until our company launches, so more on that later. In the 2.5 years I've been in L.A., I've scored 6 films using Gigastudio or GVI in some capacity. You can see some of the credits on IMDB. I'm currently ghost writing for T.V., which I also can't talk about now for obvious reasons, and I continue to march alongside Gibbs and Davis who both are currently involved with recording records right now. And of course, check out my myspace music page!!! 'Nuff said for now. Feels good to be busy.