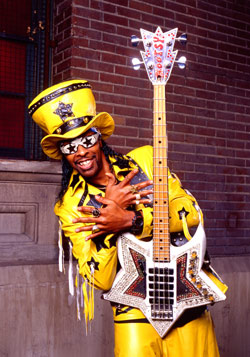 "I knew I had finally graduated and become a recording engineer," recalls Bootsy Collins about the first Portastudio he sat with. He still has that Model 144 Portastudio set up today at Bootsy's Re-Hab Studios in Cincinnati, Ohio. "I mean, wow, that was real big news to be multi-tracking back in the day. Not everyone could afford a multi-track recorder, at least until the Portastudio came out. I can't even count how many classic P-Funk song ideas I put down on tape with my first TEAC 144!"

As much a family man, friend, and cartoon-lover as he is an engineer and producer, Bootsy Collins is easily the first player that comes to mind when the subject is funk bass. He grew up in Cincinnati playing "The Twist" with Hank Ballard and backing up James Brown and recording "Sex Machine" and "Super Bad" with the Godfather of Soul, and he joined the Parliament/Funkadelic Mothership as a lifetime member in 1972. Bootsy's Rubber Band, a major branch of the P-Funk Mob family tree, recorded an amazing string of funk and R&B classics, including Stretchin' Out (In A Rubber Band) and Ahh…The Name Is Bootsy Baby! The chart-topping "Bootzilla" was still selling strong when TASCAM built and released the Model 144 in 1979, and one of those was for Bootsy.

"I was with P-Funk when I bought my Portastudio," says Bootsy, a Rock and Roll Hall of Fame inductee for his seminal work with the Godfather of Funk, George Clinton. "Everyone was pretty weird back then. I used to drive around and pick up George Clinton in my Jeep, which had a kickin' sound system, to let him hear some of the grooves I laid down with my Portastudio. I got so good with that 4-track that George actually thought I had recorded it to a 24-track machine! I asked him once if he wanted me to re-do some grooves to a 24-track. He said, ‘Naw, let's just dump what you just played me to the 24-track and maybe overdub a few tracks on it,' and we both just cracked up laughing about that."

Collins is as busy today recording, writing, playing, and collaborating on new music as he ever was during the past three decades. In addition to P-Funk and the Rubber Band, he's worked with Clinton, Bill Laswell, Buckethead, Material, and Herbie Hancock, and his new album, Play With Bootsy - A Tribute To The Funk, is a Supernatural--modeled collection of funk, R&B, and soul duos and collaborations. Snoop Dogg, Fat Boy Slim, and Fat Joe are featured with Bootsy on the record, as is Bobby Womack and Kelli Ali, the former Sneaker Pimps lead vocalist. Fat Boy Slim's gigantically successful "Weapon of Choice", which netted Bootsy a piece of a Grammy, was a collaboration with Bootsy, as well. Another they've completed is on the Tomb Raider: The Cradle of Life soundtrack. Bootsy is also currently working on a DVD of behind-the-scenes footage and features called Personal Stash, and he's expecting a new clothing line and his "Bootzilla" action figure to hit the streets this year, as well. 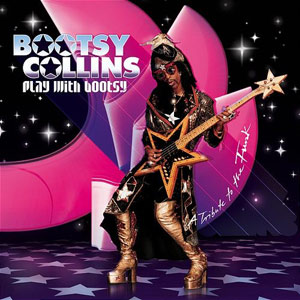 Between it all, he's constantly recording at his Cincinnati home studio. It's an understatement to say that, these days, Bootsy still gets it way up for the down stroke!