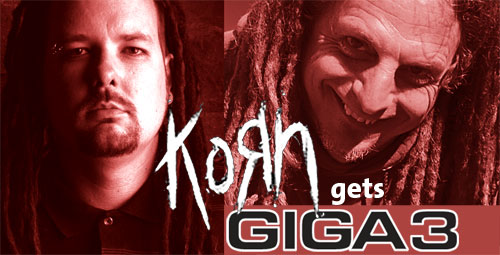 Here is an inside tip, if you want to REALLY get to know software then get to know the people who are really using it. I've been working for film composer Richard Gibbs for over two years now. It was through him that I hooked up with Jonathan Davis from Korn. Richard and J.D. scored and wrote the soundtrack for the film Queen of the Damned; nobody was surprised when the soundtrack went gold. Ever since Richard and Jonathan have been going strong--they built semi-identical writing rigs so they could collaborate even when Korn is touring. And, of course, TASCAM's Gigastudio is at the heart of each of them. Between them Richard and J.D. own eight Gigastudio machines!

So what is so interesting about the way they're using Gigastudio? Well, I'm about to tell you. This is where the film scoring world and the rock world have come together to form a more perfect union. Most of us know how Gigastudio works from a purely technical point of view. The only problem is that many truly creative people, like Richard and J.D., can't be bothered by that side of their brain while they're creating music. That's where I come in; I try to make the process painless. I create templates for them so that all of the tools are laid out before them when they feel inspired. The thing that gets me is how they both respectively and collectively approach the process, taking samples that already exist and mangling them in the most twisted ways to serve their music.

Some use Gigastudio on its most intuitive level. They load samples someone else has perfected and trigger them. Add maybe a little convolution reverb and then the sounds are on their way to the sequencer. That's the beauty of Gigastudio: you can leave it at that and you have made magic. But Richard & J.D. wanted to customize each sound and would hit any button to make it happen. Fine. Open up the Giga Editor and tweak away. Who cares if it's "technically" right, just mess it all up and see how it sounds. Layer things that should not be layered. That's the power and flexibility Gigastudio offers--and they take full advantage of it. We have a whole library of unique samples that Richard & J.D. created that blew my mind when I heard them. And I know that only these two could have created them.

Richard has done over fifty feature films now and works from his astonishing home studio in Malibu. I have been privileged enough to be involved in some of his scores and I can tell you first hand that mocking up orchestras in Gigastudio is how he sells the score to the directors and studios. It's essential. When Richard & J.D. hooked up, that power was transferred into the hands of another kind of master. J.D. has a laptop running Gigastudio with him on the road at all times, and when he's home he has three ridiculously powerful PCs (built by Lennie Moore) running Gigastudio in Korn's personal recording studio in Hollywood. The cool part is that we can remotely control either studio from either location. Now that's collaborative power!