If you've ever seen a round lime green building on Sunset Blvd. between Tower Records and The Whiskey in Los Angeles and wondered what the heck it is, join the club. 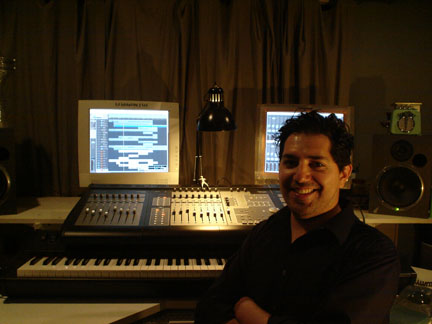 We're told it belongs to DEVO co-founder Mark Mothersbaugh and that some great film, television, video game, and commercial music and sound work goes on inside its oval walls but, for now, we'll just have to take the staff composer's word for it until actually walking through the doors of Mutato Muzika.

"There's an endless parade of people on the Strip I can see from here," says Albert Fox on the phone at his work suite inside Mutato's Forum-like design. The building was a bank and a holistic center until 1995 when Mutato moved in. It's right in the heart of Hollywood, and there's even a cool little secret vault door in the lunchroom floor, to boot. How Hitchcock!

"It's a great place to work. Mark is here every day and our clients love the building. Composing, performing, editing, and mixing under tight deadlines; juggling multiple projects and interacting with clients, I've learned it all the past eight years here observing and working with Mark."

Driving A Pair of FWs To and From Work
Using Apple Logic Pro 7, Propellerheads Reason, and an FW-1082 at the office and FW-1884 in his home studio, Fox composes music for many television, film, and multimedia projects completed at Mutato. Albert's dynamic work on it and films like 200 Cigarettes, the video games Frogger and SIMS 2, and countless commercials for major clients including 7-Up, Fox TV, and Coke. He has scored and recorded string quartets for Nike and cut tracks for a Rugrats album, and someone recently forwarded him a glowing e-mail from the high-profile CEO of a major software company about Albert's good work on a large Mutato project.

Fox has been very happy hunting down samples, arranging tracks, and mixing "at breakneck speeds" since first acquiring an FW-1082 at Mutato. Last year he added an FW-1884 to his home studio environment - where he works the most - and recently expanded the latter with a pair of 8-channel FE-8 expanders for the FW-1884. "There isn't one project I do anymore without the 1884 or the 1082," says Fox. "I'm far more comfortable working at home - just me and a control surface in my own studio environment with no one bothering me. I take most of my work home with me."

In his case, bringing his work home with him is a good thing for Fox and Mutato. "I don't mind mixing with a mouse, but once I used the FWs there was simply no going back. It's an incredible difference in how I work now because everything is so much quicker. Even just having the transport controls there on the FW-1884 alone makes a big difference. I bought the 1884 because we put a TASCAM US-428 controller in at Mutato years ago to work with Reason and it has been absolutely rock solid for us ever since the first session. Until you work in a software DAW with a controller, you really don't know how much you're missing."

Are We Not Mutato?
If their website gives even the faintest hint of what it's like to work there, Mutato Muzika must be a trip of a place in which to compose, sound design, and sample. Wild looped sound effects greet every mouse click, examples of Mothersbaugh's surreal Daliesque artwork abound, and landing on Fox's bio page triggers a mind-bending, heavily flanged and severely detuned loop of the traditional country-western melody "Wildwood Flower" for the duration of your visit to his page.

An experienced pianist and keyboardist who also plays bass guitar and can sit at a kit, Fox says it was a heavy but enriching schedule from day one for him at Mutato Muzika. 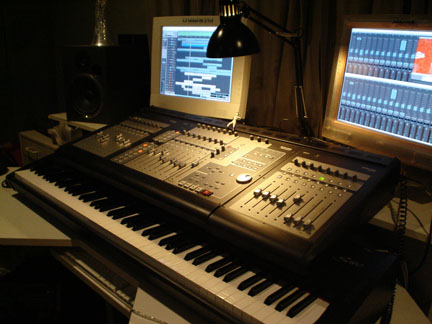 After working all morning he typically gets a quick early evening siesta each day, works all night at home, sleeps an hour or two, then gets back to Mutato early for another day of composing in the lime green oval studios. He hasn't had any time to record any of his own music since working there, which is more of a good thing for Mutato's clients than a bad thing for any solo CD ideas of his own - all that creative energy ultimately contributes to all of us hearing better music when we watch television and movies and play video games under the Mutato influence. "I'm not shy about sampling, putting that sample into a sampler, and playing it with a key on a keyboard," Fox says. "If I wasn't working so much here, I'd be sitting in my home studio all day creating and programming my own songs and synth and sampler sounds all day long." One thing Albert found precious free time for recently was expanding the FW-1884 in his home studio by two. Two TASCAM FE-8 expansion modules, that is, taking him no more than 20 minutes to install. He removed a few Phillips head screws and the side panel of his 1884, made two Firewire cable connections, connected his two new FE-8s, replaced the screws, and instantly had 24 motorized 100mm faders where there once were but eight. "I could add up to 128 faders if I wanted to go for a big console functionality, but I hope I won't ever need that many faders," laughs Fox. "I might add maybe one more FE-8 here to give me a total of 32 channels because I tend to think of tracks in groups of 8s, 16s, or 32s."

Getting In Touch With Logic
Albert and the Mutato staff like their FW-1082, too. Using Apple Logic Pro 7 with a dual 2.5 mHz G5 Mac at his studio and home locations, Fox says there are many things he appreciates about the TASCAM controllers at either end of his commute. "The low price of the FW-1802 is amazing for something like it that can record 48 tracks at 96 kHz with Logic. It also has a very small footprint, and the 60mm faders on it are a little fatter and feel great. You never get the tactile feeling on the FW-1884 or the 1082 that you're working on anything but an expensive console."

How do the FW-1884, FW-1082, and FE-8 controllers feel between Fox and the details of his music? "It feels like you're in a serious working environment with these controllers with the sense of being able to fly around in your mixes with it," Fox continues. "And, you get the feedback of the flying faders for seeing and knowing when a track or part is about to come up in your mix; you see the motorized fader jump up just before the part begins and that alerts you to reach up and grab it and bring it down or move it up in the mix at just the right moment, whatever you need. That fader flying up into place for that change in the song or track is a great way to be reminded of something creative you want to do to it to change it." Fox adds that the FW-1884's shortcut buttons really come in handy for him, as well, especially when he's done pre-mixing sections and arrives at his final mix. By that time he's long since stopped using his library of memorized keyboard shortcuts, pushed his QWERTY keyboard out of the way, and is relying solely on his FW to handle everything from tracking a solo cello part to harnessing some of the most complex mixes ever witnessed on the Sunset Strip. "The FW-1884 has saved me so much time every time I've used it. Every client who sees and uses it when they visit just loves the faders on it, too," the 33-year-old Albert concludes. "The motorized faders are great, especially when I have clients in the room who may not ever have seen a computer edit and mix session. And, the driver for Logic is just perfect! It's flawless. It does everything its supposed to do. Every single button, fader, and knob on the FW-1884 is compatible within Logic."