The Stills: Reflecting on their Portastudio Days

Back around the turn of the century, Tim Fletcher and Dave Hamelin bought a Tascam Portastudio 1 from a friend who needed some cash. Little did that friend know that Fletcher and Hamelin got the better end of that deal, considering the two traded the Portastudio back and forth writing a handful of catchy rock songs for a yet unformed band.

For Hamelin using the Portastudio was a new release, since the drummer wasn't a primary songwriter in any of his previous bands. "I learned how to write songs with the Portastudio," he says. "I really liked recording and so I kept trying to come up with songs that I could record." 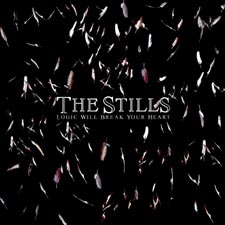 Hamelin upgraded to the Portastudio 2 and continued to write songs with Fletcher. Starting The Stills with guitarist Greg Paquet and bassist Oliver Crowe was the culmination of a dream for drummer Hamelin and singer/guitarist Fletcher. "Tim and I wanted to do our four track project that we thought sounded cool," Hamelin explains. "We just thought it was different than anything else that was going on around us and that we had something special." The quartet came up with 10 songs, a band name and a plan.

It was the summer of 2003 and the four decided to move from their hometown of Montreal, where they all still live, to New York City for a sort of punk rock residency where they could polish their sound. "It was a lot of fun," Hamelin recalls of the summer. "Weirdly enough, New York is really supportive and they were more supportive than our hometown would have been at that point. A lot of people already know us in our hometown and it's harder to make any sort of mark if everybody knows who you are and there's no mystery or mystique to anything. So, we decided to be new people and go to New York City."

Things happened quickly while the quartet was there. "Every show was pretty hectic and a lot of people were coming to our shows," Hamelin reports. "Right from the start there was a lot of industry action, so everything went pretty quick. Everything kind of skyrocketed, snowballed actually." Their first show in New York was on the 31st of July and by October the band started fielding label phone calls, eventually signing with Vice Records.

The frenzy that followed The Stills surprised them. "I don't think anybody expects that," Hamelin admits with a laugh. "You expect to go to New York and come back home a loser. You know, it's a big city and there's lots of competition but I guess it can happen like that."

The Stills debut, "Logic Will Break Your Heart" was released on October 21, 2003. The collection of 12 songs - 10 of which were written during their early Portastudio days - blend vintage alt-rock sonics with a sprinkling of pop hooks. "Love and Death" and "Still in Love Song" are just two standouts. The "Rememberese" EP was released earlier in the fall, which features the tune "Talk to Me" that is just Hamelin and the Portastudio. "We also have all these demos that we're going to release eventually," Hamelin reports.

The Beatles, The Clash, Radiohead and The Pixies influenced Hamelin as a songwriter. "I'm really influenced by The Pixies," he says. "After I heard The Pixies I discovered a whole new freedom. The Pixies have this sort of anything goes attitude, but not really. It sounds like it's anything goes, but they do it really well and it made me think that I could write songs, too and it was okay if they were a bit weird."

Although The Stills has spent much of the past three months on the road, Hamelin isn't sure how the band is going to fit into the current musical scene. "It's really early on," he admits. "I don't know how our record is going to do, so I can't really tell. There's so many options - we could be the next U2 or nobody could hear our first record."

One thing is for sure, Hamelin injects, the band is trying to lead and not follow current music trends. "What we tried to do with the record and everything that surrounds the record is create our own world and be the leaders of that world and make it really identifiable," he says. "The record doesn't sound like garage rock to me. I don't think anybody will peg is into that anyways. We want to keep everything direct in every aspect of this band, from the album to the artwork, so that it's more like an art project than a rock band."

While the band continues to move forward, Hamelin is wistful for the early Portastudio days. "I sold the Portastudio 1 to another friend because the fourth track was kind of sketchy," Hamelin says. "But I'm thinking of buying it back, I think it had good luck for us."

The Stills' drummer (and songwriter) Dave Hamelin on the Portastudio:
The Stills' Dave Hamelin had one roadblock when he purchased his first Tascam Portastudio 1. "It didn't come with any manuals," he says with a laugh. "Luckily it's really easy to use."

Lucky, indeed, since Hamelin was new to the recording deal altogether and the Portastudio 1's ease of use made laying his ideas down a snap. "It was just me, there was no band," he says of those first writing dates. "I plugged in a guitar, vocals, drum machine and all kinds of other things into the input.

"There was nothing tricky," he continues. "I mean, it's a pretty easy four track machine. They are classic things."

Was their one feature he liked the most? With a laugh he answers: "I just liked the record feature, that was my favorite one."

Along the way Hamelin moved up to the Portastudio 2, which was just as easy for him to figure out. "But you could bounce tracks on the 2, so I was able to have more tracks and become a better multi-tracker," he explains. "It was great, because I never used either one of them with the whole band. I was able to do it all myself."