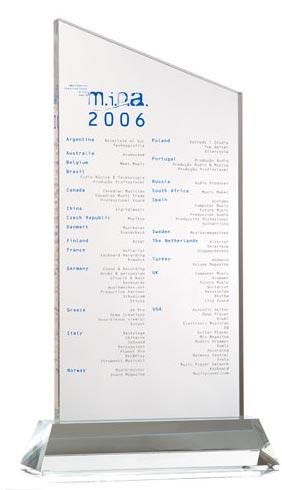 Every year in Frankfurt, Germany at the Musikmesse trade show, folks from 58 magazines around the world get together to vote for the best music & pro audio products of the year. The award is called the MIPA and on March 30th, 2006, GigaStudio 3 won for Best Software Sampler against a couple of strong contenders (Native Instruments' Kontakt and Steinberg's Halion).

This great news means that GigaStudio 3 has been continually winning awards since its release. But what's more important is the recognition that GS3 has worldwide--more than 300 international representatives of manufacturers and distributors of musical instruments and audio equipment joined for the 7th MIPA Awards, including guests from the USA, Canada, Japan, Brazil, South Africa, Russia, Poland, Great Britain, Italy, France, Greece, The Netherlands, Belgium, Luxemburg, Sweden, Denmark, Austria, Switzerland and Germany. Familiarity with the products up for awards, of course, is a must.

So here's proof, once again, that GigaStudio is recognized the world over as the best sampling software available. If you haven't yet given it a test drive, you should. You KNOW you should.

P.S. - TASCAM would like to thank the international press for this much respected award and for the recognition of our esteemed colleagues for their commitment and dedication to being the best.