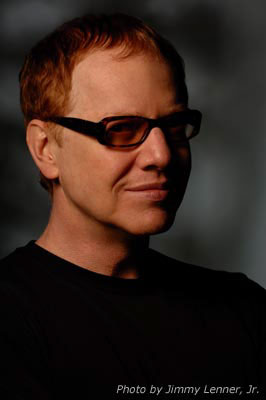 Composer Danny Elfman needs little introduction. Following his groundbreaking work with rock band Oingo Boingo, he set the scoring world on its ear with his brash, brassy scores for Pee Wee's Big Adventure and Batman. He's become one of the elite go-to composers in Hollywood, for everything from blockbuster films (Spider-Man, Men In Black), to personal films (Good Will Hunting, Big Fish), and television themes (Desperate Housewives, The Simpsons). We caught up with the composer as he was wrapping up two summer film scores - Meet The Robinsons and The Kingdom - to ask him how his TASCAM DM-3200 digital console and GigaStudio sampling workstations help his music-making process.

Talk about what led you to the TASCAM DM-3200 Digital Console.
I wanted something different. I'd had Yamaha 02Rs and I thought I could find one more-versatile board, rather than having two boards side-by-side. I looked at the specs of the TASCAM board and said, "We should try these out." It just came about by starting from scratch, what makes sense for the room? The specs of the TASCAM board made sense for what I was doing. So we arranged to get a board in and it worked out really good. It's easy, the layout is good, once I got used to the slightly-different way of accessing things, it all seems simple and logical and ended up being a good marriage.

How are you using it in your studio?
I have things patched digitally through Pro Tools, but I've also got groups coming up through the [DM-3200]. So I can take groups of instruments and mute them - I don't like having everything virtual. Also, as I bring in different instruments, I've got a board to plug into. I'm constantly adding things like analog synths, this and that. It makes things so much easier. If I want to bring in a vocoder, or a new synthesizer, I just plug them right into the board. Whereas going digitally into Pro Tools, it's a lot more complicated. You're dealing with a world where everything is patched through multiple digital lightpipe connections. It's a beautiful thing in one way, but frustrating in another. You can't just grab a lightpipe and plug it into a synthesizer. So I really like the combination of a hands-on mixer with meters, and having a digital, virtual mixer on a screen that has a breakdown of everything as well. So I can deal with it on an individual level, from the screen, or in a more traditional sense on a mixing board.

Are you doing any work in surround?
I don't work in surround. My room is purely for writing - I don't mix. When I'm writing, I don't care about surround. The fact is that all of the demos I'm writing are getting transferred to stereo tracks and sent along Quicktime to an editor to play for a director. It's all going into the Avid. Their world is stereo, so my world is stereo.

If I had a system where I had someone else doing my demos, if I wrote sketches and someone else blew it up into a full-blown demo, then I would for-sure tell them to lay it out in 5.1. But I do all my own demos. By the time I get it sounding decent in stereo, there's no way I'm going to put even 12 more seconds into that piece. I'm just going to bang right into the next one. I'm going really fast and furious. I don't work with anybody in my studio, there aren't any other humans within shouting distance. So, I don't have anything against it other than time.

Do any of your sampled tracks end up in the score?
Yes, a lot of my tracks end up in the score. In any score I do, my strings, woodwinds and brass disappear, and percussion and synthesizers all stay. In Meet the Robinsons, there were some cues that were almost all orchestral, or maybe all that would have stayed from my tracks would have been a celesta or some pizzicato strings. In other pieces, half the piece is my samples and half is orchestra. I might have 40-50 tracks of stuff where you're hearing bongos and Theremins and stuff. There's a whole part of the score which was sort of lounge-y, so I was using a plethora of bells, drums, analog sci-fi sounds and stuff like that. All of that I play myself and that stays right up to the end. So depending on the score, anywhere from 50% of the cue up to just a couple of tracks stays in, but something almost always stays. I'll print the samples [to Pro Tools] and they'll travel along to the actual recording session.

How many systems do you have?
Oh my God. You don't want to know. Because I'm working out of three rooms...

I have a complicated life. I'm like a nomad. Everyone who knows me jokes that I must come from some sort of desert nomad tribe, because I still have the urge every three or four days to pick up and move to another location. So instead of building one big house with one incredible studio, that's the place I never leave, I'm spread out over different places. I have a room here in Los Angeles, I have a room in Santa Barbara, and at the moment I have a room on the beach, where I'm heading tomorrow. And then I have to have a separate rig that goes to the scoring stage. So that's four rigs. Each rig has to have three Gigas in it, so I've got 12 GigaStudio systems.

But it's ridiculous. I'm trying to get every studio to be transparent, so I can just grab a little hard drive and run. The next thing on our list is getting everything synced up on a network, so I don't even have to do that anymore. So that will be the ultimate for the Elfman nomadic scoring system.

How did GigaStudio change the way that you compose?
It did change it a lot. I'd been working with combinations of Roland, Akai and Emulators and all the other samplers. The problem was that I would build a bank and I would stick with that bank forever, because it was too much work to find another sample. With a limited number of channels, every time I loaded something in I had to lose something else. So if I've already used up 16 channels, what am I going to do? 'Alright, I'll lose this, just so I can bring in something else to listen to.' It was very cumbersome.

Switching over to Giga changed everything. It was one of the two biggest revolutions of the last decade - GigaStudio for my samples and digital recording right into my sequencer. Those two things, then digital video, really turned everything around. Each one of these was a major step in streamlining my setup. For the Gigas, I was accessing everything from a computer screen. It made it real easy to go, I want to try this, or this, or this. I can audition 20 sounds really quickly, having a lot more places to put them. Customizing my templates for each show became much easier, simply because once I had all my sound libraries on Giga, I felt like I had everything at my fingertips all the time. Rather than going through SCSI drives and searching through multiple folders, and having to save the entire bank again just because I made one change.

You must have an enormous sample library, because I remember you used to create your own instruments and sample them.
I've got a big library. So as soon as Giga came out, it was exactly what I was waiting for. I treat my sound files the way I treat my sequence files. It will say, "Robinsons strings 2.1a," "2.1b," "2.1c," "2.2." At the end of a show, I can look at 20 banks of stuff I'd made, and because of the way I number stuff I can tell exactly where I made a change. It's a real pleasure to be able to do that, rather than searching for these folders.

So you're saving the GigaStudio performance this way?
Yeah, I'm saving lots of versions of it. I'm saving many, many versions as I go. If I had a certain thing set up three weeks ago, I can just find out where that is and load it up. "Oh yeah, there it is. I had that one drum..." It enables me to quickly backtrack through the project, find where I was a month earlier. It's much more organized now, because I'm working in a computer hierarchical system with sequences as I'm composing.

As you're composing, are you playing it right into the computer or writing it out?
No, I stopped writing it out about 12 years ago. At that point in my life, a conductor I was working with said, 'You know, you're killing yourself because you're doing everything twice.' Every part of every instrument was going into my performance that the director was hearing, and then once it was approved I would write it all out. And that would take another eight hours. There was a point where I was working 16 hours a day, every day. It was crazy. So, when I got to the realization that all I was doing is transcribing my performance onto paper, not adding anything, I decided to try MIDI notation. And the 16 hours a day went down to 10 every day. And I can even take 1/2 a day off on Sunday now. (Laughs) That was another life-changing bit of technology.

What's next?
I've just finished The Kingdom, a middle-eastern thriller for Peter Berg with Jamie Foxx and Jennifer Garner. The Kingdom was all electronic and samples.

I'm on a really interesting project right now, called Standard Operating Procedure, a documentary on Abu Ghrab for Errol Morris. This is the one I've been waiting for all year - he's my favorite documentary filmmaker. And I really get to write. And then I move into a ballet for American Ballet Theater in New York. I've got Hellboy 2 on the horizon with Guillermo Del Toro. I've been dying to work with Guillermo, so it looks like that's going to happen. Aside from Hellboy 2, I've been on the search for small, interesting projects. They're more fun to write for, by many times.