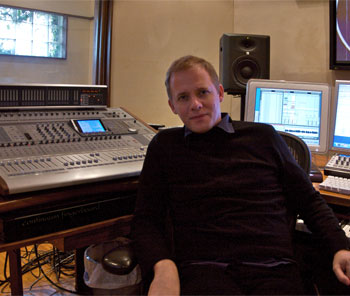 Ed Shearmur is one of the hottest young composers to hit Hollywood in recent years. His films include Sky Captain and the World of Tomorrow, Charlie's Angels: Full Throttle, Reign of Fire, Laws of Attraction and The Ex. TASCAM caught up with Ed just as he was installing the DM-4800 console at the center of his studio.

What do you think of the DM-4800 so far?
The desk sounds absolutely great. To be able to mix outside my sequencer is fantastic. I've always disliked the sound of mixing inside my host, and this gives me a lot of control over it.

What made you decide on the DM-4800?
I looked at a number of different consoles. When the DM-4800 came out, it seemed to solve a lot of the problems that I'd been anticipating. There wasn't really a desk for me that had the ergonomics, the connectivity and the connection to a sequencer that I was looking for. Once I read that the FireWire card was coming out, that was it. Because it eliminates so much form the setup. In terms of D to A connectors, my MOTU boxes are fast disappearing. I'm going to be building another studio towards the end of the year and I'm sure I'll just get two DM-4800s. That'll be it for me.

How are you using the IF-FW/DMmkII FireWire card in your system? For me, to have seamless connectivity between my sequencer and a mixing desk makes all the difference in the world.

I bought the desk primarily as a standalone mixer for my [sampled] orchestral setup. One of my goals was to have my orchestra be pretty much a constant and not have to load instruments every time I open up the sequencer. I wanted a very static and stable environment where the orchestra could always be set and I only had to press one button to print either a rough mix or to print stems. Because of the great connectivity of this desk and the FireWire card, I can print a stereo mix or I can record everything 32-channels at a time.

You also have the IF-SM/DM Surround Monitoring card. Have you done any mixing in surround yet?
Not yet. Once the card arrived in, I had projects piling up starting with The Other Boleyn Girl.

What's that process, do you start with a sound, temp music, or conversations with the director?
For Boleyn Girl, after talking with director Justin Chadwick, we knew that we wanted a hybrid [orchestra and synth] score that felt relevant to the period but not dictated by it. We haven't been afraid of using synthetic textures when necessary or more contemporary-sounding rhythms. Not electronic rhythms, but sounds and compositional approach that has a contemporary aesthetic to it.

Do you start with themes?
Sometimes it's themes, sometimes I have just a harmonic passage that has some qualities. Sometimes you can overlay a film like this with too much thematic material. So instead, it's a rhythmic idea. There's a sequence at the beginning of the film that's driven rhythmically, and thematically and harmonically it's pretty static. The process always changes, depending on the needs of the film.

I can see that you're writing with pencil and paper.
As you can see I have piles and piles of sketches, mainly. Once I have everything sketched out, then I'll bring it into the computer and maybe make adjustments from the QuickTime video. Everything is played into DP, and then I may get a score printout from DP, take that home and write back onto the printout.

What libraries are you using for your sampled parts?
We still have access to my library running on GigaStudio, There are a lot of percussion stuff that has been useful. [Project SAM] True Strike has been great and some of the Sonic Implants string stuff is also useful. It really depends on what's happening musically. But Vienna Symphonic Library covers, I would say, 90% of it.

Did working with GigaStudio change the way that you work?
When I first got it, it was an amazing tool to have. I would still use it, but because of the self-contained approach that Vienna have adopted, they force you down a certain route. We started putting our setup together in late summer of last year, my assistant Kayla wrote an environment in Plogue [Bidule] that we control with the Lemur control surface, and that's how I navigate through Vienna.

How many computers do you have running VSL?
We have two G5s and 10 Mac Minis. Each Mac Mini hosts an instrument group. So Violins are on one, flutes are on another. I use Altiverb for my main reverb and each of the individual Mac Minis have their own Altiverb running an early reflection program. So each on it placed on the stage as they should be and we use one Altiverb as the main tail.

Which Altiverb preset?
It may be just because I've recorded there, there's a recording studio in East Berlin which used to be run by the East Berlin Radio organization. It's a wonderful studio, a little bigger than Abbey Road I think, and it just has a great quality to it I think. When I saw that they had this available, I had to use it.

Are you running all of those in stereo?
At the moment, I mix in stereo. I would love to run 5.1 the whole time, but when you're delivering stuff to editing rooms, you can't have every stem be 5.1.

Do sampled parts ever end up in the final mix?
Occasionally. I don't like to do that, but there might be a rhythmic part that just needs the accuracy and clinical precision that you get, certainly for contemporary scores. That's always something to be able to fall back on. And other times, just to get the depth and the size that people are looking for these days, to have something that just sits there (samples filling out small orchestra) is very useful.

Is that dictated by budget?
No, it's about an aesthetic sense of what the audience is used to. Sometimes a plain orchestra sound in a certain context may not sound appropriate as one that's been enhanced in some way. It's just the modern sound.

What projects are coming up after The Other Boleyn Girl?
I'm going to be doing a wonderful movie called Passengers, with Rogerio Garcia who I've done two films with. That will be in the summer, and will be a mainly electronic score. I'm about a month into writing The Other Boleyn Girl, I probably have another six weeks or so before we have to record. So there's a lot to do. Most likely we'll be recording in the UK and mix back here.

Thanks for taking the time to speak with us.

Click here to find out more about the TASCAM DM-4800 Digital Console and IF-FW/DMmkII FireWire Card.