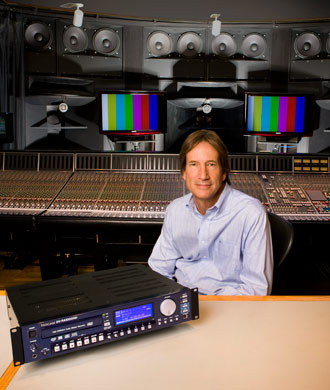 Allen Sides is one of the most respected names in audio engineering. He owns and runs Ocean Way Recording, the world's most awarded studio complex with over 1 billion albums of record sales. Allen Sides has recorded over 400 albums and won two Grammy™ awards. A few of the artists he's worked with include Phil Collins, Green Day, Eric Clapton, Frank Sinatra, Trisha Yearwood, Mary J Blige, John Williams, Joni Mitchell and Frank Zappa.

We sat down with Allen to ask him about his DV-RA1000HD, the high-resolution stereo hard disk, CD and DVD recorder from TASCAM. The DV-RA1000HD records up to 192kHz WAV files, but can also record Direct Stream Digital or DSD audio, the 2.822MHz/1-bit format developed by Sony for Super Audio CDs. Though Allen began using the DV-RA1000HD as a CD player and D/A converter, he's begun to use it for mixdown as well.

How did you start using the DV-RA1000HD?
I thought it sounded really, really good as a CD player. It's become the player that we use when I demonstrate our Ocean Way Monitor system. We take it with us to the CES show in Vegas, we take it to Japan, and we've made comparisons of your player to extremely high-end players - players in the $18,000 to $25,000 dollar range. I've preferred your player in every occasion thus far. Now I'm not saying it's the best player in the world but it's certainly good, [especially] for the price and what it does.

My friend Bill Schnee was using it as a sort of storage medium as something to record to. I hadn't really listened to the converters until recently. I was mixing a Bobby McFerrin record, mixing to 192kHz on a stock Pro Tools 192 interface. I was using a Big Ben clock but using the stock Pro Tools converters, and I made a comparison to printing DSD on your device. And it sounded significantly better recording DSD.

I like having the highest resolution sources possible, then I mix and master with analog [consoles and processing]. I play from whatever the highest res source I can get, and then I make whatever gain changes I want to do in the analog domain before I print the finished mix. DSD works just fine for me at that level.

So you're recording to Pro Tools at 192k and mixing to DSD. Do you still think there's a benefit to DSD in that instance?
It sounds better. The [DV-RA1000HD] stock converters, in DSD, sound considerably better than the Pro Tools converters at 192k, even with the [Big Ben] clock. The Pro Tools converters are actually quite respectable once you get out of the filter range - the filters don't really become an issue when you record at 192kHz. For what you pay [for the Digi 192] versus what you get - and I'm relatively picky - it's pretty darn respectable. 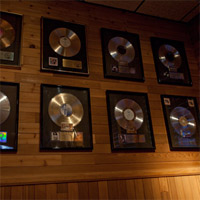 Are you recording to the hard drive first and then making discs?
Yes.

You've mentioned that you hear a generational loss when copying or burning CDs.
Well, I've never been able to make a copy of a CD, from a CD to a CD, ever, that sounds like the original CD. About 15% of the sonics goes away, for me. If I have multiple CDs, I'll load them into the hard drive. Going to the hard drive and playing it back doesn't sound any worse than a copy of a CD. I've just never been able to make a transfer of a CD like that. But if you record directly to the hard drive, and then you're making CDs, it's a reasonable approach.

Is it only on CDs that you hear that? Can you hear a copy of a file on a hard drive?
I haven't had a problem. In Pro Tools I've been able to make a copy of a file, from drive to drive, it doesn't seem to be an issue at all, as it is coming from a CD.

Because, you know, you can hook up the DV-RA1000HD in USB mode and copy files that way, if you don't want to burn a disc.
I haven't made the comparison to see. We made the safety CDs out of it and I didn't do the direct comparison between those and the drive, to see how much difference there is. Something tells me it's not the same. I know that's hard to believe.

Record companies these days, when they make a new album [pressing] they don't even bother going back to the masters. They just copy the CD and reprint it, and it sounds significantly worse.

It felt like bad timing for us when we came out with this product. We came out with the DV-RA1000HD just as everyone's mixdown format became "Bounce to disc," because everyone is mixing "in the box." [i.e. using the mixer in Pro Tools or other DAW workstation software.]
Well that's interesting, because the majority of hits are not mixed in the box. The majority of hit records you hear are mixed analog. Probably 85% of the high-end albums that come out, all of those mixes are done analog. A lot of consumers are mixing in the box, they don't know any better.

Here's a reference point. When I was doing a record with Phil Collins we had done 10 background vocal tracks. I was moving along quickly so I just bounced those to two channels in the Pro Tools mix buss to call it a day. Phil's still sitting there, we're listening to it, and he says, "what happened to the sound of the backgrounds? I thought it sounded much bigger than that." I still had 10 faders up on the console, and I had the two I had just made. I could match the levels exactly and A/B it, and the stuff I had just sent to the Pro Tools mix buss sounds significantly smaller and not as good. So then I simply assigned the 10 faders to an analog buss, printed that to the Pro Tools, and that sounded fine. And that's just a classic example.

If I'm stuck having to mix [in the box], maybe I'm out somewhere with nothing else available, I'm happy just to take a simple Mackie mixer. I'll come out in stereo stems, in analog, I have my drum stems, my vocal stems, and everything is printed through the Mackie.

So if you're mixing [in the box] with a ProControl, it's lame-sounding. You know, compared to what it can be. It's not even close.

So how about a summing mixer, for a small studio that doesn't want an analog console? Is that a good way to go for a smaller setup?
There's a million ways to do it. But spending a fortune on this stuff isn't necessary. A Mackie is a pretty simple device, bunch of 5534s [op amps], not very much in the signal path, it sounds fine and it's relatively inexpensive. You can buy a high-end box that does that and spend $10,000, or you can spend $600 [on a Mackie or TASCAM analog mixer]. But the difference in the sound coming out of Pro Tools is greater than either of those two amounts.

I've also found that if I change a level up or down 10dB in Pro Tools, the sound will be degraded. [Mix moves] like a guitar solo or a piano that's a major level change, like 10dB for the solo, it gets grainier sounding. If I come out of Pro Tools [level] changed to any major degree, I hear it. If you're riding a vocal and you're only taking one word up, [it's too fast to] even notice it. If you have to take a big stereo instrument and bring the whole thing up 10dB, assign the track to two sets of outputs. Then bring it up on two sets of faders: one is how it was recorded, one is 10dB up. There's a tremendous difference in sound - some sort of horrible truncation is going on. Try it, A/B it. 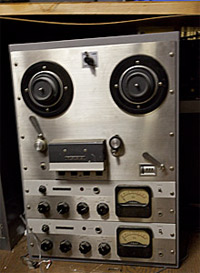 You were saying that you've been a TASCAM and TEAC user for years...
Well, going back to my garage studio, I had a TEAC R-310. Actually... (we walk to the Ocean Way parts storage room and uncover...) That is a TEAC R-310. That was their version of the Ampex 351-2, the professional model. I forgot I still had it sitting here. I used to get parts for it at your place, the TEAC building where you are. Do you still have parts for old models? Check and see if you have a belt for an R-310, I could use one. I was using that machine in 1968 and 1969 in my studio, Pacific Ocean Park. It was an amusement park and I had a studio there when I was in 10th grade. So I have some history with TEAC.

Thanks for taking time out to talk to us today.
OK, thanks!